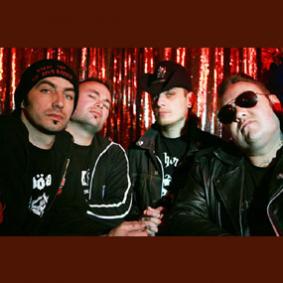 Since the kick-off back in ´96, these guys have been on stage several hundred times all over Europe putting on an amazing performance. But the rise to success started in the fall of 1997 when they released The Horrorway E.P. (own label), which sold out in just a few months. This success drove the guys to put out a second mini-album titled Six feet down and two fingers up. During the recording-sessions for Six feet down, two fingers up, the band was contacted by the german label People like you Records (sublabel to Century Media Records). and in the summer of ´99 The Bones signed the contract. The rock´n roll circus was about to take off! Not content with this they also signed with german booking-agency, MAD. This crazy carousel made way for their first full-lentgh album Screwed, blued and tattooed which, in turn, resulted in the band touring all over Europe gaining new fans wherever they went. The Bones was rattling the cage, making some noise

In the spring of 2002 The Bones released their second album Bigger than Jesus, again the guys recorded at the PAMA-studio backed-up by People like you. Great reviews were echoing from all over Europe but the album also attracted some great feedback from the U.S. Touring has continued and the band has headlined several festivals and toured arenas together with Die Toten Hosen. Live The Bones have also supported bands like D.A.D, U.S. Bombs for a whole european tour, shared stages with Motörhead, Roger Miret & The Disasters, 999, Angelic Upstarts, Cockney Rejects, Type O Negative and so on... As you can see this is band a that play to live and live to play down to the bone!

Right now The Bones are in the studio to record the forthcoming album Straight Flush Ghetto (working title) which will be released Through People Like You/Century Media in the spring of 2004. The Bones will continue touring all 2004, so hide your booze and women... and watch out!!!