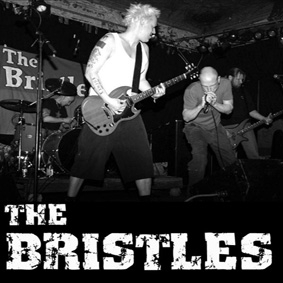 The Bristles is a raw punk band from Landskrona, in the south of Sweden.
The Bristles were formed in 1982, after the towns ship yard shut down.
Alongside bands like Asta Kask, Sötlimpa, Existenz, Moderat Likvidation, Noncens, EATER, Anti Cimex and many others were the Bristles the new breed of new fast bands that released mostly singles in this period, and did a lot of gigging. The music and the lyrics were written from the back side of the 80s yuppie century; the sell out of the public recourses to the private, mass unemployment, reduction of the workers real wages, dismantling of social security, which ended in the death of the welfare state. The Bristles split up in 1985. In 1998 they played a one-off reunion gig at Bollnäs-punken with a stand-in drummer. The Bristles reformed in 2008, when the welfare state only is a memory. The music and the lyrics are still written from the back side of the post welfare state after the 90s steel bath; increased class distinctions, increased number of poor, the concentration of wealth, racism and crime. The Bristles stands for solidarity and unity. The Bristles been busy gigging in Europe since the summer of 2008, and is always looking for new gigs and new challenges.