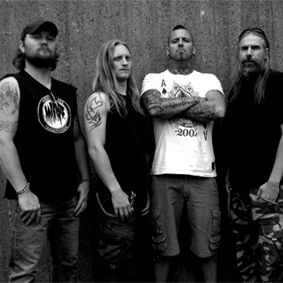 You have heard about WOE for the first time in the early year of 2008 when bass player Nicke Janson and guitarrist Ronny Lodin smashed their brains together to create pure rock'n'roll.

Songs were recorded, musicians were tried out but there were only one issue. WOE could not find the right dudes that shared the same musical vison as they did. They'd been auditioning for a drummer to give them that particular sound that they were looking for. They tried a lot of different drummers during live shows but none of them felt quite right.

A year later the band met the charismatic, hard hitting drummer Anders Jacobsson and they knew instantly that he was the drummer they've been looking for all along.
After a few member changes the only thing left was to find that voice who would complete the sound of WOE. The search begun and after a few months Ronny, Nicke and Anders came in contact with the brutal and insaine singer Michel Kolic and finally WOE stood complete.